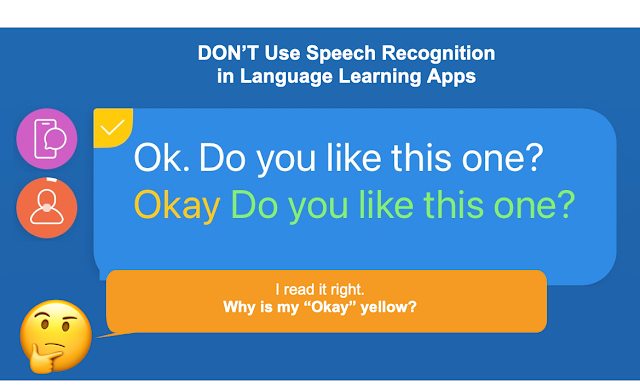 After researching ~100 language learning apps in South East Asia and the American app market, I found that only 27% allow users to practice speaking, and most of them use speech recognition as speaking feedback.

It is happy if a recognition system can recognize speech, but what matters the most is how to deal with mispronunciations, which fail the recognition system. It can not shed light on where and how to improve, but those are where learners should put more effort.

Words are building blocks of sentences. Trying to speak words first, then putting them together into sentences is classic speaking practice. However, speech recognition is inaccurate in recognizing words.

So it’s highly possible that when you read the word “OK” correctly, the app tells you that you’re wrong because the recognition result is “Okay”. Speech recognition can not tell apart homonyms.

In summary, if language learning apps make *an efficient learning experience* a priority, then they need to rethink what they need. Not a speech recognition system for speaking practice, at least.

At  SpeechSuper, we develop AI-based speech technologies to analyze speech from language learners, including pronunciation, fluency, completeness, and more. If you’re interested, please contact us on the website.

Qiusi is a product manager in China’s EdTech industry focusing on language learning and AI. She enjoys writing stories. You can reach her at qiusi.dong@speechsuper.com

*Prior written consent is needed for any form of republication, modification, repost, or distribution of the contents.

Popular posts from this blog

What is Speech Assessment and Why it Matters

by Qiusi, Product Manager of SpeechSuper  What is Speech Assessment Speech assessment is the process of giving algorithm-based corrective feedback for speaking activities in language learning. It's also sometimes called pronunciation assessment. Speech Assessment 101 Speech assessment is largely based on the "Goodness of Pronunciation" (GoP) algorithm developed over 20 years. While automatic speech recognition (ASR) aims to decode the best possible option of acoustic model and language model combined derived from data in a specified language, GoP only cares about the acoustic model with the language model pre-defined, hence producing an acoustic likeliness score measuring “how similar a speech sounds like compared to native speakers of a particular language”, which, in short, is pronunciation. Simply put, for speech assessment, the input is speech audio + reference text, and the output is a score of pronunciation.   Evolution of Speech Assessment Over the past decades, th
Read more 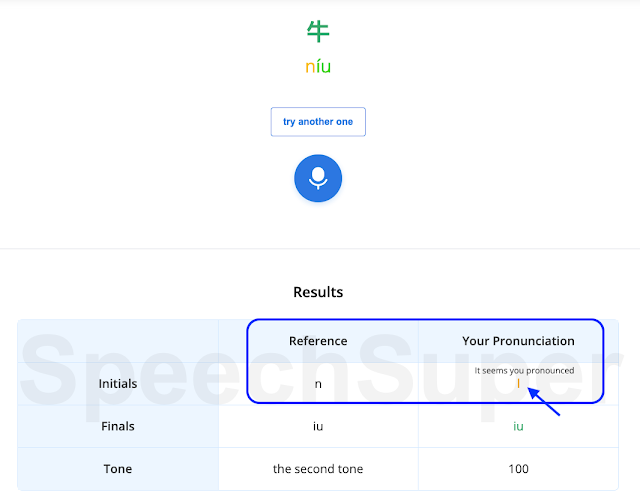 SpeechSuper has long supported the assessment of Mandarin Chinese character pronunciation by scores. However, scores might be insufficient to give concrete instructions to users.  We're excited to announce that SpeechSuper recently launched the feature - the Mandarin Chinese mispronunciation detection. It spots users' mispronunciations of Chinese characters and returns if they mispronounced an A sound for a B sound, making feedback more specific. Here are two examples.  Example 1: A user was expected to read aloud "níu", but she said, "líu", confusing the initial "n" and "l" in pronunciation. SpeechSuper API found the error she mispronounced 'n' for 'l' with a confidence score of 100. Example 2: A user was expected to read aloud "shēng", but she said, "shēn", confusing the final "-eng" and "-en" in pronunciation. Click here to try it out. SpeechSuper API found the error she misprono
Read more